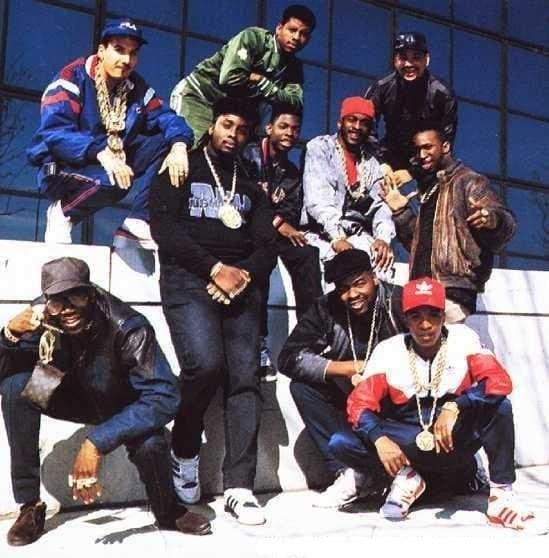 There aren’t too many people who would not deem Eric B. & Rakim‘s debut LP Paid In Full a classic album. In 1987, this album set the bar for what a good solid rap album should sound and look like. From the minimalist production to the complex rhymes, to the art direction, everything about Paid In Full is classic.

I could do a book on the impact of the lyrics and music of Paid In Full. Similar to Illmatic, it sent aspiring rappers back to the drawing board. Rakim’s style was so unorthodox that Marley Marl, MC Shan and Craig B all mocked Rakim’s style. They all felt Rakim lacked the energy it took to make a rap record.

Rakim recently wrote a book, Sweat The Technique Revelations on Creativity from the Lyrical Genius which covers many of the writings and the process of coming up with Paid In Full.

Aside from the music and the lyrics, there was the artwork. There was something captivating about the small inset picture on the back cover.

It’s the first album I remember seeing “the crew” on the back. [The cassette and CD cover was too small to see.] Eric B. and Rakim are surrounded by their boys, dripping in gold who weren’t the music personnel. Growing up in NYC, there were only a few people who looked like this and they didn’t rap.

After Paid In Full, a few other albums from NYC had the crew photo. However, none were as iconic as Paid In Full. This image represented the most infamous hustlers, rappers & gangsters of the mid-1980s.

This picture made a statement. WHO IS MESSING WITH ERIC B & RAKIM IN THESE STREETS?

There are no stories, myths, legends, or folklore about Eric B. or Rakim ever getting robbed.

Who’s In The Paid In Full Picture?

According to Eric B’s Instagram post, Rap is Eric B’s best friend. Rap passed away due to Covid-19. Out of all the people in this picture, Rap stood out the most. Aside from his all-Fila outfit complete with matching Fila sneakers, and the traditional pager, he has the most jewelry on.

This is an important detail as Cormega summed it up on Instagram.

During this era, you COULD NOT wear an abundance of jewelry in NY if you weren’t respected. Period.”

Rap appeared to be loved by everyone. Here’s a post from Paula Perry who knew Rap personally as well as a flick of Rap in his later years and Eric B’s daughter, Erica. Sadly, Erica passed away this year as well.

From Paid In Full To Stillmatic

Could Nas‘ Stillmatic be a homage to the Paid In Full inset cover? Let me know in the comments.

The Mystery Of Paid In Full

There is ONE item that I have never gotten clarity on. Why did someone take a gold marker and trace over the jewelry? I’ve noticed that on repressing, the gold tracing is missing.

If anyone knows the answer to that question, please let me know.

You may have missed